Considering anew the notions of talent and excellence.

HLLC is a transformational college access program that is broadening pathways to college for promising talent and re-imagining academia. It is focused on identifying the talent within our midst and providing continued opportunity and prosperity for all, including those who have been systematically disenfranchised by systems of inequality.

The HLLC is redefining the notion of “honors” by creating intergenerational and interdisciplinary learning communities comprised of students, faculty, and community partners focused on tackling some of the nation’s most pressing social issues.

The HLLC engages notions of merit and who is “deserving” head on, framing them as a challenge to identify and cultivate the untapped talent in our nation’s increasingly diverse new generations.

Building organically on their own knowledge and lived experiences, HLLC students learn to increase cross-cultural competence and approach local challenges that resonate globally from historical, philosophical, legal, and comparative perspectives.

The HLLC is a signature initiative grounded in the Anchor Mission of Rutgers University-Newark (RU-N). At HLLC we have a mission to provide continued opportunity and prosperity to all, including those who have been systematically disenfranchised by systems of inequality. Considering anew the notions of talent and excellence, the HLLC is committed to revolutionizing honors, cultivating talent, and engaging communities.

Our vision is to create a more equitable, diverse, and socially-focused tomorrow by serving as a strength-based model in a larger movement across higher education.

To realize this vision HLLC will:

The HLLC vision is enabled by the movement for publicly engaged scholarship that is gaining traction in higher education. This makes room for interdisciplinary learning communities of scholars, students, and community members who engage in deep reflection and problem solving about local and global issues.

The Honors Living-Learning Community (HLLC) was founded in January 2015 as a signature initiative growing out of the Rutgers University-Newark (RU-N) strategic plan. The initiative was imagined under the visionary leadership of Dr. Shirley Collado, former executive vice chancellor and chief operating officer of RU-N, and Dr. Nancy Cantor, Chancellor at RU-N, along with a collaborative and action-oriented university-wide group of stakeholders interested in connecting opportunity and excellence, and cultivating frequently-overlooked talent, who challenged how institutions of higher learning defined ‘merit’.

Prior to its founding, an interdisciplinary team of faculty and administrators visited learning communities on college campuses across the country in an effort to glean best practices for operationalizing their vision.  Inspired by their visits, this team, under the leadership of Dr. Bil Liepold, Associate Vice Chancellor, and Dr. Sherri-Ann Butterfield, Executive Vice Chancellor, were awarded a seed grant through the Chancellor’s office to pilot the first cohort of the HLLC.  Generously funded by the MCJ Amelior Foundation and Rutgers University-Newark, this cohort of thirty students was named after renowned scholar Clement Price, and students were referred to as the Price Scholars.  This pilot community of the HLLC was called the Social Justice Learning Community (SJLC).  After a successful year within the SJLC, the Honors Living-Learning Community (HLLC) was officially launched in September 2016. Led by the Admissions Office, an intensive collaboration between multiple departments on campus helped RU-N realize its anchor mission by admitting the inaugural cohort of 60 scholars, two-thirds of whom were from Newark/Greater Newark. 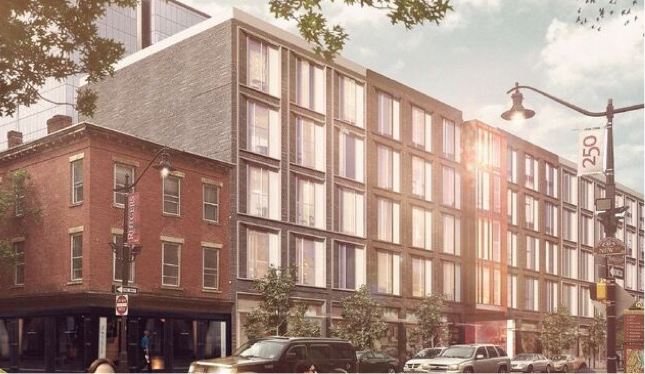 The Honors Living-Learning Community building is a 320,000 square-foot, state-of-the-art learning and residence facility that will include residences, classrooms, work spaces, street level retail and parking.  The building will house 400 undergraduate students and provide an open space for RU-N students, faculty, staff, and community members alike to gather.

The building will be located on the block bounded by New, Washington, Halsey and Linden Streets, a site that is right across Washington Street from the Center for Law and Justice.  Expected opening is in 2020.

State of Affairs with Steve Adubato

END_OF_DOCUMENT_TOKEN_TO_BE_REPLACED

While we could not celebrate in person to congratulate the award recipients and class of 2021, we gathered virtually! If you missed it or would like to revisit, you can access our ceremony video here: The HLLC Graduation and Leadership Awards: Speakers: HLLC Team:...